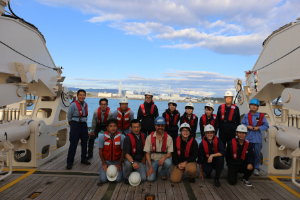 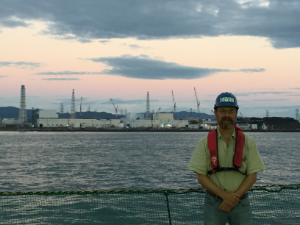 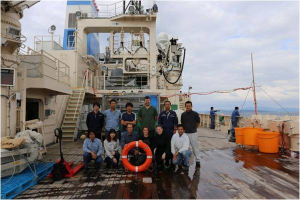 The project FRAME “The impact of recent releases from the Fukushima nuclear accident on the marine environment” is built on a strong collaboration of scientists from Spain, US, Belgium, Switzerland and Japan to better understand the sources, fate, transport, bioaccumulation and associated impact of radionuclides from the Fukushima Dai-ichi NPP accident in Japan. The investigation encompasses the main compartments of a complex marine environment, namely the water column, the seafloor and marine biota living within them.

The Fukushima Dai-ichi Nuclear Power Plant (FDNPP) disaster resulted in the largest accidental discharge of anthropogenic radionuclides to the ocean. We plan to investigate coastal and offshore sites, participating in two oceanographic cruises in October 2014 and 2015 onboard the RV Shinsei Maru to be conducted in the most heavily impacted areas. We will determine the concentrations of a suite of contaminant radionuclides in water, suspended matter and bottom sediments, and we will assess the transfer to marine biota. With our research we will be able to answer questions such as: i) what fraction of the total releases is stored in marine sediments and what is the aerial extent of the contamination in the seafloor; ii) how much radioactivity is still leaking from the Fukushima Dai-ichi site; iii) to which extent have the concentrations of contaminants in the ocean changed since 2011; and iv) what are the current impacts on marine biota.

As an opener for the project, in October 2014 we participated in an oceanographic cruise on board the RV Shinsei Maru to investigate the most heavily impacted areas identified in previous studies, with previous cruises indicating that the bulk of the contamination was injected into the “mixed water region” between the Kuroshio and Oyashio Currents that dominate the region of the Pacific Ocean off the east coast of Japan. The aim was to try to obtain a time-series of the changing contamination levels in these regions.

The samples that have been collected include water at surface and along vertical profiles, plankton, fish and sediment cores. To obtain this, the Shinsei Maru is equipped with CTD/Rosette casts, plankton nets and sediment multi-coring as well as on-board sample preparation facilities. We also have access to samples from various coastal sites that are being collected at different times throughout the year around the FDNPP via our collaboration with the Institute of Environmental Radioactivity at the Fukushima University. These samples will allow the determination of radioactivity concentrations of a suite of contaminant radionuclides (137Cs, 134Cs, 90Sr, plutonium isotopes, 236U and 129I) in water, suspended matter and bottom sediments. We will also assess the transfer to marine biota (including fish, macroalgae and plankton). Measurements of other natural radionuclides (i.e. 234Th, 210Pb, Ra isotopes) will help us to quantify groundwater fluxes, residence times in the ocean and accumulation and mixing rates in bottom sediments.

In 2015 we again boarded the R/V Shinsei Maru for a 10 days cruise on offshore from the FDNPP, where we collected 124 samples at 19 different stations including 121 seawater samples and 3 sediment cores. Artificial radionuclides have been analyzed in order to determine their fate in the ocean. The natural quartet radium isotopes will also be analyzed to quantify the fluxes of chemical elements associated with the offshore transport.

The work performed under this project is instrumental in addressing relevant questions such as: i) Which is the fate of the contamination in the ocean, what fraction of the total releases is stored in marine sediments and what is the aerial extent of the contamination in the seafloor; ii) How much radioactivity is still leaking from the Fukushima Dai-ichi site and which are the mechanisms that govern the releases to the ocean, such as the role of submarine groundwater discharge; iii) To which extent have the concentrations of contaminants in the ocean changed since 2011 and iv) what are the current impacts on marine biota.

The results of the project will be published in peer-reviewed journals and presented at international conferences.

Sanial, Buesseler, et al. What are the main sources of Fukushima-derived radionuclides to the Ocean off Japan five years later? GOLDSCHMIDT conference 2016 (abstract).

The project will also serve as a basis for training of young researchers and active participation in outreach activities within and outwith COMET.

Help scientists at the Woods Hole Oceanographic Institution reveal the ongoing spread of radiation across the Pacific and its evolving impacts on the ocean - See more at: http://ourradioactiveocean.org/