CROM: A code to integrate dose assessments for humans and biota

CROM was born as a computational tool implementing the more complex models included in the Safety Report Series No 19 (SRS-19) of the International Atomic Energy Agency, and has evolved in order to include new capabilities. The SRS-19, published in 2001, compiles the generic models for the transport of radionuclides in the environment, produced as a discharge in an installation, and all their associated parameters.

It was in 2007 when a stable version, quality controlled by the IAEA, the CROM 6, was distributed by the Agency worldwide as the base for the calculations of those models. After that, CROM 7 was created for propagating the uncertainties of the measurements and parameters through the models and almost immediately a new version, CROM8, began being programmed in order to include the protection of the biota, according with the requirements from the IAEA and the UE.

The CROM 8 (Figure 1), a tool for the integrated assessments of effective doses for humans and absorbed doses for biota, was developed under the base that both approaches require contamination levels of environmental media such as air, freshwater, soil, etc. as inputs. Therefore, the use of common models for deriving those concentrations from the discharges produced in an nuclear, radioactive or even NORM installation, would allow the simultaneous calculation. CROM 8 includes default data for 163 radionuclides for humans, from which 63 have data for biota. Two sets of Reference Animals and Plants are also available, one from ICRP and accepted by the IAEA and another from ERICA. The code doesn’t include the screening levels (tiers) included in the SRS-19 for humans or in the ERICA-Tool for biota. The code allows performing assessments in rivers, lakes and marine environments and in contaminated atmosphere and soils.

The development of the tool was performed by the CIEMAT and the Polytechnic University of Madrid and co-sponsored by CIEMAT, ENRESA, IAEA and STAR.

A parallel development began simultaneously to CROM8, the Open Platform CROM (OP-CROM), with the intention of becoming a flexible tool which would allow the implementation of any model, including those of the SRS19, which would be able to run under different computer platforms (operative system and computer architecture) and which would use and produce every data and parameter as separate text files, in opposition of using an established database as was the case in the CROM family. It would be freely distributed and would follow the open software philosophy, what would allow other people contribute to the development. However, OP-CROM is much more, and plans exist for generating new modules with advanced models; develop modules allowing dynamic calculations; include additional default parameters; or code additional graphical user interfaces which would include the presentation of the results in geographical maps integrated in other tools as in Google-earth.

All the CROM versions are freely available at ftp://ftp.ciemat.es/pub/CROM 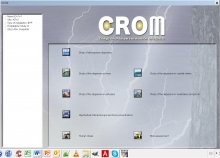